When I found myself widowed, overwhelmed, lost and lonely, I was very far from a place of self-awareness and understanding that would enable me to make good choices for myself concerning the people you should choose to have around you. Being suddenly disconnected from the life you’d known for many years and the profound silence that follows, the immature loneliness that emerges from that grief can lead to a minefield of poor choices. Eventually, you arrive at a place where you are finally beginning to heal, but in the meantime, oh the people you’ll meet.

Such a bitter statement, isn’t it?! My first foray into the dating world was the misfortune of finding a “player”. Basically, this type of person is best described as someone who is into serial dating. He will claim he’s  looking for a long term relationship, but this is so far from the truth. Conquests and self-gratification are the player’s only goal. I was taken in by his life being so “together”. He claimed (I still don’t know, nor do I care today) that he was a hedge fund manager, lived in quite an impressive home and had several very nice vehicles. Dates were always at places meant to impress. Phone calls were regular and filled with many terms of endearment. Then, one day, he’s gone. At first, you don’t know what’s “wrong”. You’re unsure of what has happened, but after a few days of not hearing back, you slowly realize that you’ve been taken by his apparent “charm”. Lesson learned for sure.

One aspect of the player is that he maintains a certain semblance of “control and power” over you. His constant attention and verbal boosts to your self-esteem when it’s at its most damaged and fragile is the way he operates. For those, like myself, who existed in a former marriage containing a foundation of abuse through control and power, he had me hook, line and sinker. I was able to process enough of this that when he called months later, swearing he “needed time to think because he was becoming so attached to me and it scared him”. It didn’t work. *click*

The Needy (Young or Immature) Man 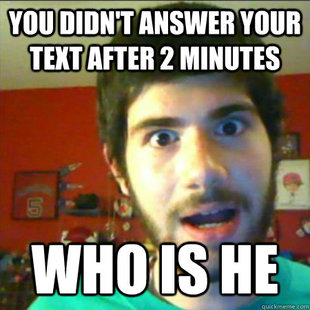 The next clusterf*** I encountered was someone much younger than myself. I didn’t want the power and control issues I’d dealt with for so long, so my still damaged and fragile self thought that being with someone who “needed” me would be a better choice. Oh goodness, could I have been any more wrong? There is a strange draw emotionally to be the one who no longer has to worry about verbal attacks or constantly feeling vulnerable and afraid. You are now the one who calls the shots, makes the decisions and guides things according to how you believe life should be. The only problem is that the other person has NO skills or ability to join in at your level.

You’re not “better than” him or “more right”, but there is such a chasm of disparity between the two of you, that it will never, EVER work. At first, the *power* you have drives you to keep plugging away, just knowing that it will all work out in the end. Eventually, you tired of constantly having to play the parenting/mother figure and fix all the problems that his own inept parenting experience created him to be. Whether coddled, spoiled or ignored, their complete lack of social skills, education, resources and other needs will eventually (and more quickly than you realize at first) wear you down. *goodbye* When the relief upon their absence is felt so strongly, you at once know you’ve made the right decision.

I remember when I first met him. He was so smitten by me! Oh how special and wanted I felt. We spent hours talking, laughing, the joy was palpable. Then, *screeching tires*, “I know I haven’t mentioned this before, but, I’m married.” But, BUT! They are living separate lives. [Insert long story that, to you, makes complete sense! They are only together for the children. They are only staying together because it’s so expensive to own two houses. They are getting divorced when their youngest graduates.] OMGOSH how easily you will believe him. They haven’t lived as man and wife for years. Phone calls go late into the night, emotions develop. It’s wrong, BUT, they are getting divorced right?

Please don’t fall for this, ever. Is he lying? Sometimes. Sometimes he really believes that he wants to end things, he’s so tired of the loneliness and you are the one he turns to to express how much he wants to be with you. Bottom line? You will waste time and wind up sad. He will return to HIS miserable existence without you and his paranoia at “getting caught” [and subsequently paying out in a divorce for cheating] will send him running. You should run, very fast from this person. Nothing good will EVER come out of it.

This one is perhaps the most damaging type of all. Maybe you find out he’s depressed very soon into the *relationship*, maybe you don’t. Perhaps you find out by just listening and being observant, or perhaps you are directly told. No matter how you find out about it, you’ll know it. It slapped me in the face like a poorly thrown fish at market. There are many warning signs that you are being drawn in, yet again, by this type of situation. At first, you think that those diagnosed on more than one occasion who refuse help or treatment are just unsure of how to deal with it, but eventually, you find out that the three things listed above are about the only things you will ever experience.

There is still a stigma, especially among men, that seeing therapists and taking medications are not *manly* and they can fix anything with a different approach and all will be well. Sadly, depression is a biological issue, a physical issue that creates very intense deficiencies in how thoughts, actions and other aspects of living are handled. You may think that you can try to be helpful, but everything you try to do will be met with a hostile, negative attitude. This man always believes he is right and will block any of your attempts at help or friendly advice as an attack and will go way out of their way to turn it around on you. Deflecting one’s problems onto another (Yeah, it’s her fault I’m depressed! She said this and made it worse!), fabricating stories to make themselves appear more appealing and interesting (making up travel or other interesting scenarios, yet having no pictures or other proof i.e, broken camera excuse etc), multiple excuses for everything (claiming they don’t have time for things, allowing their personal care to descend into being unkempt personally as well as their surroundings etc) is one of many ways the depressed person will try your patience. Once they’ve drawn you in with a false pretense, the slow reveal of how things really are will at first make you want to help, to once again, be that person who can be there for someone else and make things better. It is a hopeless situation.

It is best to sever all ties and escape the vitriol and spiteful existence that they will deflect onto you. Once you realize that you cannot continue with this type of person, you will know what to do. In this case, unlike the player, you MUST sever all contact. They will find any way to keep going on about it (the blame on you etc), all sorts of attempts to make others believe them that YOU were the issue not them. It’s awful. All you CAN do is walk away and block, block, block! Any other incoming items (texts, letters, emails and other attempts and repeated contact should be deleted/shredded and erased). Eventually, they will back off and move on. The best way to look back is to hope they will get help, counseling and make some attempt at bettering their life. It’s not YOUR job to fix them.

(It is not being with someone battling depression that turns me off. I would love to be with someone who is working on being healthy and aware of their challenges and willingness to work on things. Sadly, my first and only experience was emotionally exhausting and there was a 100% unwillingness to change anything and I was told that directly. I am far from perfect in any way.)

Embracing Solitude…Moving On and Up

In every one of these cases, your connections and eventual demise of these relationships will not leave you back where you started. Sure, there will be a loss of time, perhaps an increase in stress and even temporary loneliness. If you’re lucky, you will walk away with some pretty heavy lessons learned. At the very least, you didn’t lose yourself so completely that all hope is lost. You’re back to another attempt at solitude and self-healing, which is so important for those who themselves are still emotionally damaged and vulnerable. Recognizing that you still need time to heal, process your grief and work towards healthier mental health is practicing good self-care!)

Admitting that you’ve made mistakes is the first step. Acknowledging that you are still healing and need to continue working on yourself are priorities (that you won’t skip or neglect) is paramount. (I’m proud that I’ve been in continuous therapy for six years. Soon after my husband and parents passed away, I made sure to get into therapy, for the process is long.) What so many of us do is realize that we are seeking companionship (and there is nothing wrong with wanting that) when we ourselves are still broken. If you are vulnerable and not ready, you will make rash decisions, poor choices and will wind up with other broken people like yourself. If you are still healing, how can you be expected to have a healthy relationship?

I don’t think that I could say it much better than the picture above. Oftentimes, we miss that what we deserve IS ourselves. Our ability to become whole and be receptive to other healthy individuals, whether it be new friends, experiences or eventually a relationship is something to work towards passively and actively on many levels.

Many say that we are not meant to be alone. I have wondered who said that. Perhaps, they are related to the person who said that money cannot buy you happiness? It really does come from within, over time, with a lot of reflective thought, time and healing. Don’t rush it. I did and wound up paying for it in the end.