I have spent more time in the past month, researching, arguing, talking on the phone with psychologists, developmental pediatricians, three-hole punching 300+ pieces of paper and just generally being miserable about my daughter’s education than anything else I’ve done. When you have a child with an IEP (Individualized Educational Plan), there are two things that can and will happen. One: You will get along with the team at your child’s school and you will build an IEP that provides quality choices, accurate diagnosis and a clear picture of how everything sees your child’s future will turn out. Flowers, high-fives and feelings of accomplishment are optional. Two: You will lock horns with everyone in the IEP, you will be blamed for everything, falsely accused, maligned to your face (which pretty much ensures they are doing it behind your back), belittled and made to feel that you know nothing and that the other members of the team are far superior than you and they know what’s best for your child. Since jumping up on the table and screaming would probably be counterproductive to getting your child help, you sit there and stew, boil and figure out ways to afford a lawyer, private school and a long vacation; not necessarily in that order. 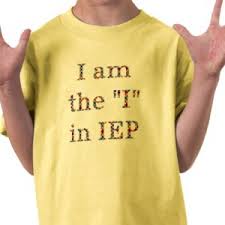 What I think, in some cases like mine (see “Two” above), no matter what you do, no matter how hard you try, you are going to have to fight for your child’s rights. I am a widow with two autistic children. I’m lucky I am getting by, let alone have money for a legal advocate or a lawyer specializing in special education law. The school will tell you they are doing their best to help your child, that they only have her best interests at heart. That’s great, if her report card didn’t have more E’s than the word eyeteeth (which navigating an IEP is easier than pulling).

Going back to the beginning of this mess, I allowed the school to target what I thought was helping her. I let them “code” her as her primary disability being ADHD. In IEP terms, that amounts to the phrase OHI (Other Health Impaired). I also allowed them to put into place accommodations that purported to help her succeed. Despite her getting many E’s and failing fourth grade math, they continued to rave about her abilities in English (don’t get me wrong, I’m thrilled she’s doing well in English; that’s her strength!), but downplaying the E’s. They tried to explain all the reasons they believed she wasn’t Autistic and fought me, despite my showing the results of tests that were clearly definitive, and her extremely extensive history with programs with highly structured tasks and a low number of students and repeated statements that she would continue to need that level of support. So, when she was placed in classrooms with over 15 students, no one to one support and accommodations for the wrong disability, she inevitably started failing. Without another thing/person/concept to blame, they turned to me. There are far too many things that have happened to adequately list them here, but let’s just say they tried very hard to wear me down. They cut me off mid-sentence, ignored me when I presented prior information, did the “look” between themselves they thought I couldn’t see. I left every IEP enraged, distraught, feeling helpless. This is how they get you to give up, or at least try. I decided not to let them win.

So, instead of existing on the defensive, I went on the offensive. The team chairperson, who I would use the word hostile to describe, made a huge error. She violated my rights. That’s when I knew I had my way in. I finally had a reason to go over her head. I went to her superior after gathering the facts that my rights had officially been violated and went to work. I demanded things politely and insisted on this being attended to. I called her out and won. I may not have won the whole battle yet, but I made a HUGE stride. She was schooled by her superior about what she did wrong and was taught how to do her job correctly, if not better. She was told that her job is not to defend the system and create an adversary in me or any parent. She was told she could not deny me the rights I am entitled to AND asked for. (they were given to me faster than any process I’ve ever seen in the system) I am in the process of having my daughter re-evaluated.

For those parents out there who are exhausted, in tears, worried for their children’s educational process, please don’t give up. Call your local volunteer lawyer’s service, contact places that can refer you to educational advocacy. Google is definitely your friend in these matters. Contact the school and ask if there are any parent advocates or information that can help you. Document EVERYTHING you do; every phone call, every person you speak with, and what was said during each encounter. You may think you will remember it all, but you will not. Start a binder with all relevant papers. However, above all, don’t EVER give up. Don’t give in to tactics that make you feel like you are wrong and they know better for your child. If you feel something isn’t right, don’t back down! You’ve got this.